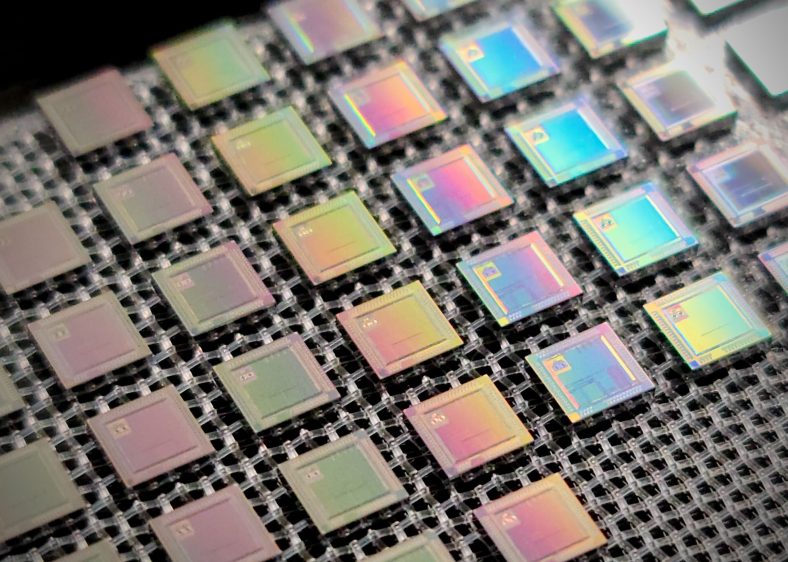 London, UK, 26 October 2022 – Quantum Motion, a UK-based quantum computing start-up led by academics from UCL and Oxford University, has achieved a world-record measurement of quantum devices made on a silicon chip. The company has been able to place thousands of quantum dot devices, integrated alongside control electronics operating at temperatures less than one tenth of a degree above absolute zero, and all realised on a single silicon chip fabricated in a commercial semiconductor foundry. This lays the foundations for mass production of quantum chips using existing silicon manufacturing processes. The results were announced at the IEEE International Conference on Electronic Circuits and Systems in Glasgow, UK on 24th October.

Quantum Motion’s latest chip – called Bloomsbury – is a 3x3mm2 device created by a tier one foundry using the same mass production processes used in standard electronic chip manufacturing. But unlike regular computer chips, Bloomsbury contains thousands of quantum dots into which single electrons can be loaded, one by one, to serve as qubits. In a huge leap for mass characterisation of such devices, the team have demonstrated how 1024 quantum dots occupying an area of less than 0.1mm2 can be measured within an industry-leading 12 minutes. All of this is achieved at temperatures of a few tens of millikelvin (-273 Celsius), which is required for the spin qubits to operate with minimum error rate.

Going from today’s small quantum processor demonstrations to large-scale quantum computers requires overcoming several challenges. One in particular is how to address each qubit in a large array without needing a vast number of input/output connections to the chip. Quantum chips need to be controlled just like conventional CPUs, which contain billions of transistors but are interfaced to a motherboard using only a few hundred input/output connections. Achieving this means not only manufacturing quantum devices using the same processes used to make conventional electronics, but also designing the electronics circuits in a way that can function at the ultralow temperatures required for qubit operation. Quantum Motion has demonstrated both achievements in its Bloomsbury chip, leading to a major acceleration in the measurement and validation of quantum chips based on silicon.

“The team have created bespoke ‘quantum primitives’, our version of the transistor, the building block of conventional CMOS circuits, which we can use to trap individual electrons,” said Alberto Gomez Saiz, Integrated Circuit (IC) lead at Quantum Motion. “Integrating these on-chip with conventional electronics, which we designed to work at deep cryogenic temperatures, allowed us to read out thousands of quantum devices with only 9 wires coming into the fridge. It has removed a major bottleneck to scaling.”

“We developed high frequency readout techniques and software automation to measure the array of 1024 quantum dots, showing single electron behaviour, in 12 minutes,” said M. Fernando Gonzalez-Zalba, Principal Quantum Hardware Engineer at Quantum Motion. “This is 100 times faster than other industry efforts, which can take 24 hours or longer to read the equivalent number of dots.”

The chips were fabricated at a commercial foundry based on Quantum Motion’s designs, using 300mm wafer production processes that are used for high yield and high volume chip manufacture. Working closely with the foundry to achieve this impressive result is a major milestone on the way to achieving a scalable quantum computer.

The chip name references Quantum Motion’s original base in Bloomsbury working closely with cryogenic laboratory facilities at UCL, before it opened its own independent lab in Islington, London, in early 2022.

John Morton, CTO of Quantum Motion, commented: “This result is a true interdisciplinary effort by our IC engineers and quantum physicists and accelerates the development of mass-producing quantum chips. It shows the huge potential of realising quantum processors using advanced silicon foundry processes.”

Read our blog post about this result where we share how our team of engineers and physicists work together to achieve these results.